In Blog Post 4 I talked about the signs of a serial killer and the Psychopathy Checklist-Revised that was created by Dr. Hare, a psychologist. The checklist can be used to conduct a clinical evaluation of someone who has a psychopathic personality disorder. The tool will help determine the amount of personality traits and social behaviour possessed by the individual. Interpersonal, affective, anti-social, and lifestyle are the four most common reasons for them becoming a serial killer.

In this Blog Post I will be talking more in depth about each phase from Blog Post 4, thought process, and how they pick a victim.

During the Aura Phase this means that the serial killer would distance themselves from any social interaction. This phase would last from seconds to months. They would have a fantasy during this period with either sexual or violent acts that could have happened from childhood experiences. They would use alcohol or drugs thinking that it would help them get back to normal, but it would intensify the fantasy. In the Troll Phase the killer would try to find their victim. They would find a victim in places that they are familiar with or where he feels comfortable to go to. They would also look for a discreet area to perform the murder and a place to dump the bodies. They would try to make sure that everything is perfect until they find the right victim. They would stalk their victim to understand what their behaviour is like and what they do. In the Wooing Phase the killer would try to charm the victim to lure them towards their car or to the area. This phase is important to them because it allows them to proceed to murder the victim when they have trust in him. When the trust is received, they would lure them and kill them. In the Capture Phase they would remove their mask and reveal who they really are. There are times where the killer would lure their victim to their car with no car handle or a remote area with little people and help. Once they made sure that there was no way for the victim to escape, they would go to the murder phase. In the Muder Phase the killer would reenact what happened during their childhood and do it to the same to the victims. This may depend on the killer they would kill them instantly or will torture them until their death. With an organized killer they would torture them or go along their plan but with a disorganized killer they would kill them right away. (5)

WARNING: Before you start reading the next phase there is an uneasy feeling that you may get or it gets a bit morbid for yourself so, please read at your own risk or skip to the last phase which I will leave a marking to where it is.

In the Totem Phase their excitement for killing drops and they would wake up from their fantasy. Which could lead to depression, or they would try to preserve their fantasy. They may collect the victims’ belongings to have as a prize or their body parts to preserve or consume them. They may take pictures or record their crime as well. This would be part of their trophy to help them feel powerful that they go to experience the killing time and to remind themselves that their fantasy was reality. (5)

In the Depression Phase their depression could last for days to months. They may be really depressed where they would commit suicide. The victim is known no longer in their thought, the memory of the victim is still there. The killer would not feel the satisfaction that it is over. The killer may even confess to the police before the cycle starts again. (5)

This cycle would start all over again going back to the first phase.

How they pick their victims:

A retired FBI profiler, Dr. Ellen, specialized in psychopathy. Dr. Ellen said that their preferences are a combination of victims if they are available, accessible, and desirable. From what she discovered the killer’s preferences would develop over time with the early practice murders. The early practice murder is when the killer finds their identity and will kill whoever is available. After they get enough experience, they would narrow down how and whom they want to kill. When serial killers have their itch to kill, they would just kill someone who is available and accessible during that time. After they took a closer look, they found that some serial killers would have a descriptive victim preference. For example, Dr. Ellen said that Ted Bundy preferred women with long dark hair, who were young, and attractive. She also said that she noticed that he broke his pattern when he abducted and murdered a 12-year-old in Florida. Another serial killer was Eddie Leonski. He looked for women who had nice voices. Investigators hope to find a pattern in the killer’s victim preference which helps them narrow down their search. (4) Many investigators found that serial killers would have a fantasy of their ideal victim based on their gender, ethnicity, features, and other characteristics. (2) It is said that in the data of 3000 killers and 10000 victims 51.4% of the victims are female, 67% are Caucasian with a 24% of black, 7% Hispanic, and 2% are another race. They prefer younger victims with 27% of them being ages 20 to 29. (3) 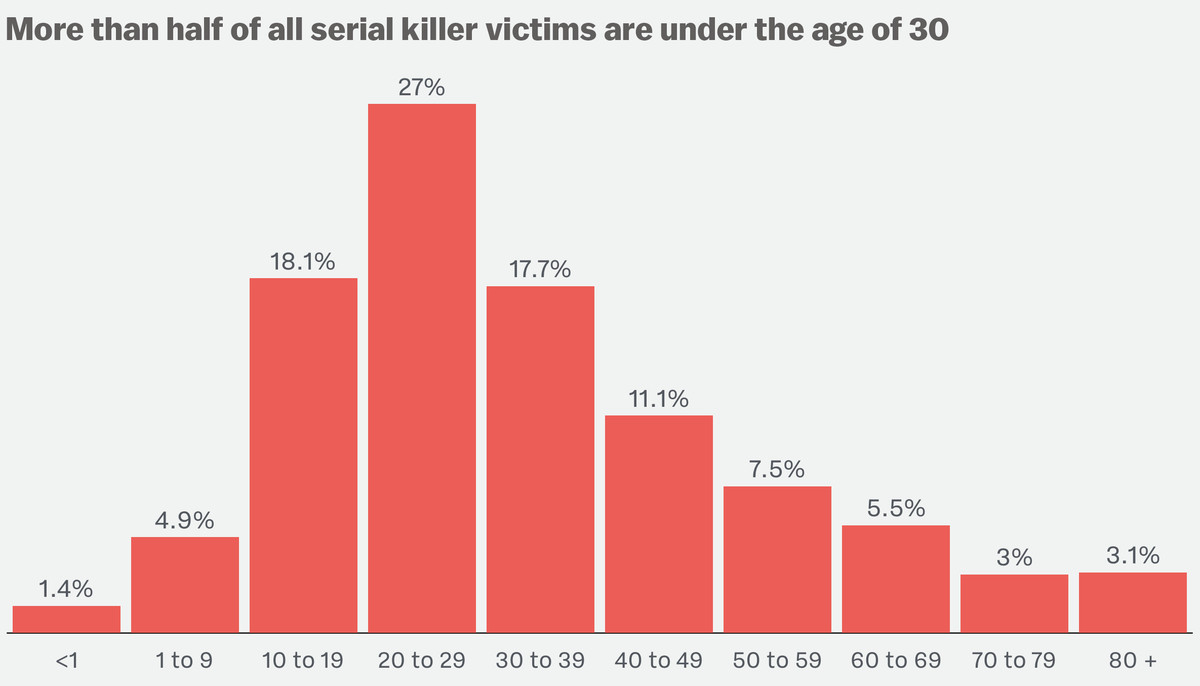 To review this Blog Post, we went over how they would look for victims and how there are patterns which could help find the killers easier. As well as going into more depth about their phases and their thought process. Thank you for reading my Blog Post and I hope to have a discussion with you with a visual on our presenting day.

One Reply to “Blog Post #5: What do Serial Killers think and feel about killing”