Hello to everyone,today I will looking on something I have been searching because I have been thinking of it for a long time and I hope it will help each and everyone and also the society in general.

Worldwide, most countries recognize that equal rights should exist between men and women. Many have produced regulations intended to fight discrimination and programs granting women access to health, education, and economic rights such as land ownership. However, the fact remains that women have fewer opportunities than men to benefit from economic development, with lower participation in the labor force.

Even in the most advanced countries, their wages average 73 percent of those of men. International programs such as the Millennium Development Goals point out the benefits of addressing gender inequality and the positive impact this can have on poverty reduction.

While the principle of gender equity in the workplace is generally accepted, discriminatory practices persist in many organizations despite regulations to the contrary. It is important to create an open and friendly atmosphere to address gender discrimination issues; therefore it is critical to involve men and women rather than only women. Because gender biases are embedded in culture, it is very difficult to eliminate them without having a holistic view and involving men as a part of the solution.

Did you know that each extra year of schooling that a mother receives reduces the risk of infant mortality by 5 – 10%?In fact, if all women had a secondary education, child deaths would be cut in half, saving 3 million lives a year. And if all mother’s completed primary education, maternal deaths would be reduced by two-thirds, saving 98,000 lives.

The stats speak for themselves! And saving lives is really just the tip of the iceberg. A quality education for girls would also improve child nutrition, reduce child marriages and teen pregnancies, and reduce the pay gap between men and women. Not to mention offering women a pathway to financial independence.Yet, in Sub-Saharan Africa only 8% of girls finish secondary school! In Ireland that figure is 93%. Imagine what could be achieved if we could start to close that gap? 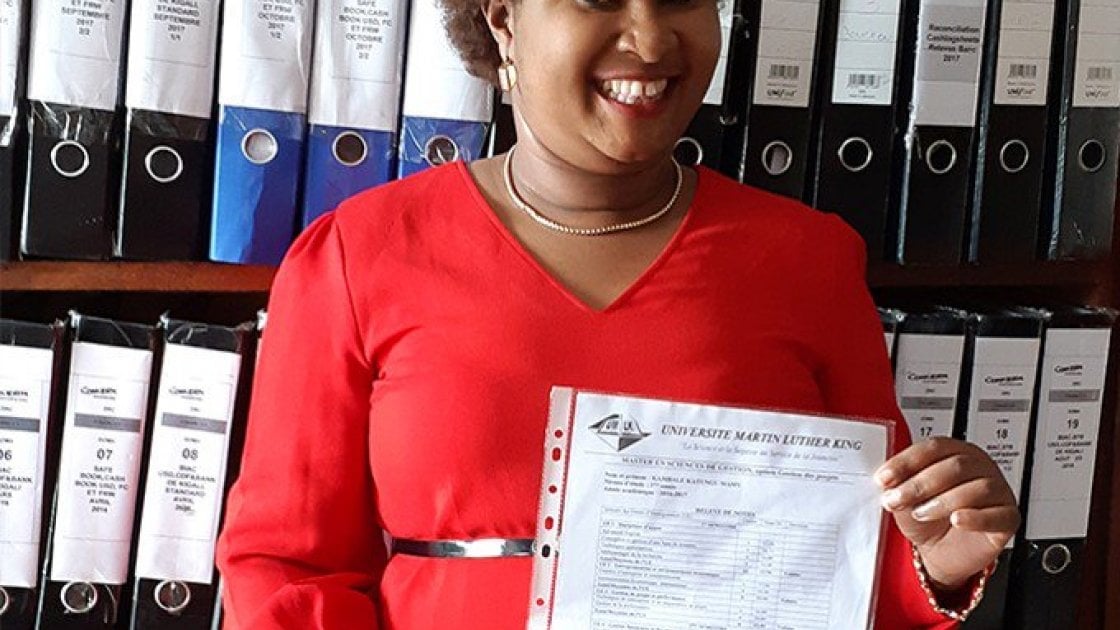 Mamy Katangu an accounting assistant for Concern in Democratic Republic of Congo.The number of men attending school in the DRC is still much higher than the number of women. I am among the few Congolese women who continued to study… Thanks to my diploma, I am independent and I can buy everything that I need. I feel empowered as I do not depend on anyone financially.”

2) When women can read, their children’s health improves.

A child born to a mother who can read is 50% more likely to survive past the age of five.Yet over 496 million women are illiterate – making up nearly two-thirds of the world’s illiterate adults.We can, and simply must, do better. And not just for the sake of children’s health. The ability to read is a skill that can transform a woman’s life and help her to transform the lives of those around her.

Empowering women to work has benefits not just for the individuals, but also for the wider economy.According to a McKinsey Global Institute report, if women were to play an identical role in labour markets to that of men, as much as $28 trillion, or 26%, could be added to global annual GDP by 2025.

Yet around the world, women consistently face barriers to accessing labour markets. According to UNESCO, over 2.7 billion women are legally restricted from having the same choice of jobs as men. And women’s labour force participation rate is 48.5 % compared to a rate of 75% for men.If we want to end extreme poverty, it is essential to address these barriers for women.

4) When women have a say in household finances, the whole family benefits.

According to the Clinton Global Initiative, women reinvest 90% of their income back into their families, while men reinvest only 35%.So, as well as providing a boost for the economy, supporting women to earn an income means better health and education outcomes for their children.

5) Gender inequality threatens the lives of women and children.

Gender inequality is both a major cause of and an effect of poverty and hunger. It is a vicious cycle that threatens the lives of women and children and results in millions of deaths every year.The World Food Programme estimates that 60% of chronically hungry people are women and girls.And UN WOMEN say that 70% of the 1.3 billion people in poverty worldwide are women.

Globally about 303,000 women die from pregnancy-related causes every year. The global estimated risk of a woman dying from a maternity-related cause is one in 4,900, but that ratio rises to one in 180 in developing countries. And every year, 2.7 million newborns die. That is 7,000 newborn babies dying every day.The tragic reality is that these deaths are nearly all preventable. But we need to break the vicious cycle of poverty hunger and gender inequality in order to prevent them.

Hello everyone am Dennis Ngatia and this is my first year in butterfly effect.I am 17 years old and am in grade 11 now.I have in butterfly effect for atleast one year now it has helped me a lot.I would like to say that through butterfly effect I have been able yo learn many things and even people from outside our country and I appreciate that we usually talk with them very well.I dont think I have something that I have forgotten but if there is I will let you know.Bye.
View all posts by denno →

One Reply to “Why is gender equality important?”