In the future, how will languages converge and influence each other, and will the world one day end up with one single global language?

For my third and final round of research, I will look into the history of language interactions (how they have historically merged and changed), how languages are currently influencing one another, and the most widely spoken languages.

A history of language:

There is a debatable amount of between 3000 and 8000 languages around the world, and each language has its own unique history and specific culture, which is much too much history for me to go into in this one blog post. For that reason, my explanation of the history of language will be relatively general, with a slight focus on Indo-European languages as the languages that I speak fall into that category.

Languages haven’t always been in a state of decline, in fact, for a long time, the number of languages was increasing. No one can be sure exactly how or where languages started, but the general theory is that the world started with a couple of different groups of people, each group with their distinct language. Over time, these groups separated into more groups that went on to develop their language in drastically different ways than the group they left behind, based on their location and neighbouring groups. Over time the connection between the groups faded, and what could have once been recognized as different dialects, was then incomprehensible from one to the other, and a new language was created.

Linguists try to trace back to find how all of our languages are connected, and their history, not unlike tracing back one’s genealogy. Languages connected in this way all trace back to a similar proto-language or root language that places them in that language’s Language Family. A Language Family is somewhat like a tree of languages, that constantly branches off in different directions, creating completely different languages that have the same proto-language. 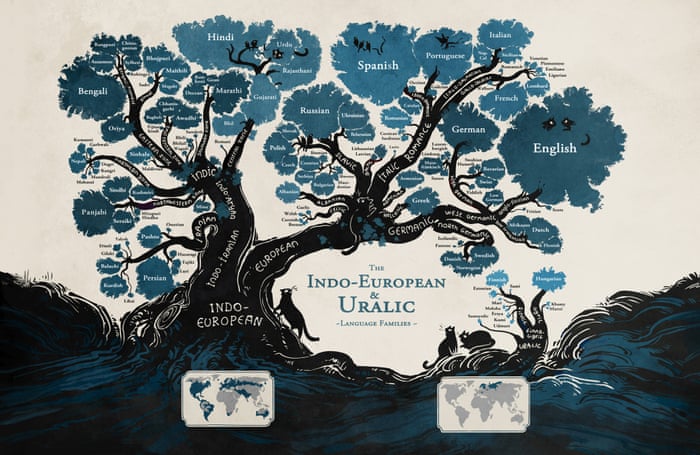 This picture is of the Indo-European and Uralic Language Families, which come from Europe and the Middle East.

But, to trace the languages back, linguists must determine which and how languages are connected. The obvious answer to this would be the sound of the words like how the word “hand” in French is “main” and in Spanish is “mano.” However, this way of tracing the languages is unreliable, because the words could, rather than be derived from the same source, be directly taken from another language, false cognates (when a word sounds the same in two different languages, but have no etymological coordinance ex: “坊や” (Bōya) in Japanese versus “boy” in English) or onomatopoeia (lots of animals have similar names across languages because of the sound they make). For this reason, the linguistic roots of languages are more often traced back using the grammar structure of the language, or the syntax. In this way, it is known that the languages are derived from the same root because grammar isn’t something that can be borrowed from another language but stays relatively consistent no matter how much the language evolves. If a linguist were to follow the Language Family through the appearance (spelling) or the sound of the words, they compare basic vocabulary that would, once again, not transfer as easily from one language to the next, such as terms of kinship, pronouns or numbers, and look for common sound changes in the words.

Now, here I’m going to go into the specifics of the Indo-European languages, but know that most other Language Families started the same way, unless they were just grouped based on location because not enough research has been done into their languages.

Through tracing the languages back to their roots, it has been found that almost all European and Middle-Eastern languages have three common ancestors, Greek, Latin and Sanskrit. These languages were some of the only languages spoken in that area of the world for a very long time, and as their empires (for the Romans) or popularity faded, the languages jumbled together and dialects shifted until hundreds of new languages had been created. Some languages, like French, Italian or Spanish, have to this day, stayed very consistent with their main root language, Latin. However, others, like English, have not. English is a Germanic language, which is a branch off of the Indo-European Language Family tree, that developed by changing the consonant sounds in the words depending on their location, and what the proto-language was. In this way, the original Indo-European stop consonants “P,” “T” and “K” became “F,”  “Th” and “X” (later “H”). There were many exceptions this rule, which were explained at the discovery that the stop consonants’ shift depended on where the placement of stress was in the word: If the consonants “P,” “T” and “K” were in the middle of the word, they became “B or V” “D” and “G or W” and only if the stress on the word immediately preceded the consonant, did those letters become “F,”  “Th” and “X.”

With all of this information, languages can be traced back to their proto-languages, although not much further, and the history and movement of the language can also be tracked based on what other languages they interacted with.

Finally, languages like English have a lot of borrowed words and terminology because the English have historically had very little restriction in what words they accept into their dictionaries, and so if a word was used once in a piece of writing or someone hears it and it gained widespread use, Oxford would often quickly include it in their dictionaries. English was also exposed to a lot of other languages because the English colonized many countries and took over their cultures.

How languages are currently influencing each other:

As historically, the biggest way that languages are influencing each other is through something called “Loanwords.” Loanwords are words that are taken from one language and used exactly as they are, in another language. A very common example of this is déjà vu, which is a French term very commonly found in English context, to the point where it is now an official “word” in the Oxford Dictionary. Loanwords are usually words that don’t have an equivalent in the language they are being taken to, but, at least loanwords to English, were originally seen as prestigious, and a way to flaunt one’s importance. In knowing and using a word from another language, you were taken to be well-educated and intelligent. In these cases, they were often referred to as luxury loans. Over the past 1,500 years, English has taken on loanwords from over 500 different languages.

The other way that languages influence each other is with calques.  Calques, also known as loan translations, are when one language adopts a new word, term or linguistic device directly from another language, but translated. The four types of calques are structural calques (adds new construction to the language), typographic calques (typographical constructions are added to the new language), orthographic calques (transliteration of words) and paronymic calques (two words that sound the same but mean different things in two languages).

The way languages share terminology now has not differed greatly since when it originated, as even over the internet, linguistic groups often stay confined to their respective languages.

The most widely spoken languages:

Chinese, (which is categorized as a language by linguists — including all native languages spoken in China) has 1.39 billion native speakers, which is the most native speakers of any language on the planet. Hindu-Urdu has 588M speakers, English has 527M, Arabic has 467M, and Spanish has 389M native speakers.  However, out of all of these languages, English is predicted to grow the most and is even now, supposedly referred to as the “global language.” But, why? Chinese and Hindu-Urdu both have significantly more speakers than English, so theoretically, it wouldn’t make sense that English is the “biggest.”

The reason is that English, although not the most common first language in the world, is spoken in significantly more countries than any other language and, in fact, the number of English speakers who speak English as their second language, has grown to outnumber the amount that speaks it as their first. English is spoken widely in 101 countries, compared to the small total of only 33 countries for Chinese.

Because English is so widespread, even if it’s not spoken by native English speakers, it’s becoming a tool between people of other nationalities to communicate with one another and has therefore slowly become the accepted language of trade, business, science, medicine and diplomacy.

2 Replies to “3rd round of research”